Chennai has hundreds of temples to boast of, each accompanied by a host of wonderful traditions and intriguing myths. And hidden amongst the many well known temples are stories of lesser known temples or lesser known stories of what at one time were important temples. This article covers some such stories, and as with all such stories based on faith, it would be hard to separate individual interpretations from the beliefs of a larger community. Stories tend to change with each teller and there never seems to be a right or a wrong version when it comes to faith…

Are you familiar with Goddess Thulakkathamman? Probably not. But walk across the bylanes of Triplicane and you might just end up at a 300 hundred year old temple dedicated to this Goddess.

Speak to the temple priest and the story you will get to hear is that this idol was found by a local Muslim boy, and then the Goddess subsequently appeared to him in his dreams. ‘Thulakkan’ being a local slang to refer to Muslims in those days, the deity promptly acquired the name of Thulakkathamman, loosely translating to ‘Muslim Goddess’.  The temple is frequented by people of many faiths today, and the deity like most ‘Amman’ temples is considered extremely powerful, and capable of ridding one of all evils.

Built a few centuries ago, the Velleswara temple tells us the story of a saint called Shukracharya who became a teacher of the demons. It is believed that long ago, Bali, the King of Asuras (Demons), had the heavens and earth under his possession. When the gods approached Lord Vishnu for help, he disguised himself as a Brahmin named Vamana and decided to take the three worlds as alms from the Asura King in three footsteps. The wise sage Shukracharya over heard the plan and rushed to warn the King. But Bali was a man of his word and surrendered his kingdom to Vamana whole heartedly. Shukracharya was taken aback and angered by the pride of King Bali and just as Bali was about to seal the promise by symbolically pouring out water from his vase, Shukracharya shrank himself and sat on the spout of the vase. Vamana then simply picked a straw of hay that lay on the ground, and directing it up the spout, poked the left eye of the sage. And that left Shukracharya blind in one eye. Shukracharya felt insulted and prayed deeply to Lord Shiva, who, pleased with his devotion, appeared before him and gave him back his sight. The Velleswara temple commemorates this penance of Shukracharya. It is interesting to note that this temple houses idols of both Shiva and Vishnu, which while not unique is fairly uncommon.

This ancient temple dates back at least to the 7th century. ‘Murundeeswarar’ translates to ‘the lord of medicine’ and this temple is dedicted to Lod Shiva, worshipped here as a divine physician. And the temple has an impressive list of associations cutting across Hindu eras. Sage Agastya the all powerful sage who practiced Herbal medicine is believed to have been introduced into the mysteries of the herbal world in this very place by Lord Shiva himself.  Tirugnanasambandar, the ardent devotee of Lord Shiva is believed to have visited this temple and sung the praises here, as is Arunagirinathar the 15th century poet from Thiruvannamalai. Sage Valmiki the author of the epic Ramayana is said to have been blessed by Shiva here and hence the place started being known as Thiruvalmikiyur, gradually changing to the current ‘Thiruvanmyur’.

Like many other temples dedicated to ‘Amman’ this temple also plays host to many practices seen as ‘mystic’ by the west. From fire-walking to body piercing, you see it all here during the festive months. This is also the place devotees come to, to get cured of chicken pox and measles. This temple is believed to have been built around an idol that was found among snake pits, and worshippers soon took to the practice of ‘feeding’ the snakes. And though there are no snakes here today, the practice continues and people still leave raw eggs and milk at a dead tree within the temple that might have once been home to snakes. An interesting story that you would get to hear in this temple is about why the main shrine does not have a permanent roof over it. It seems many have tried putting a roof over the idol, and each time it has come down in haste. So people believe that the Goddess here considers the sky to be her roof and will not allow any other structure over her head. So till date, the idol is kept in a thatched temporary structure. 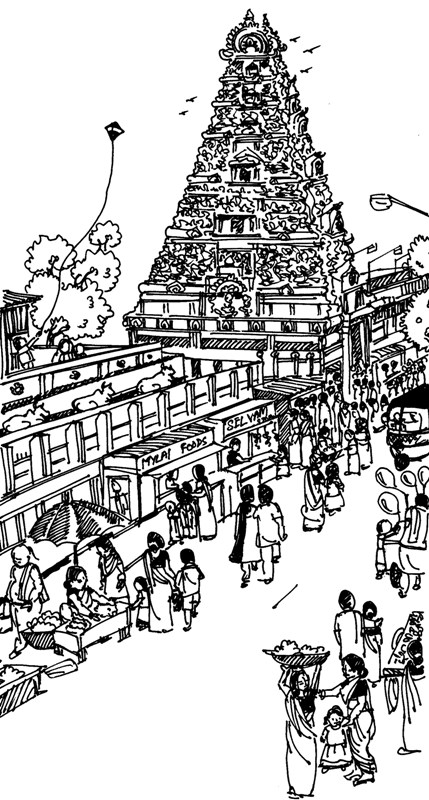 Leave a reply Click here to cancel the reply

Temple timings: The monuments at Mamallapuram are open from 6 AM to
6 PM, on all days of the week. The Lighthouse complex closes at 5.00 PM.

Access: All monuments covered on this trail are open to everyone.

Best time: Go as early as you can. The walk is best done between 6 AM
and 10 AM or between 4 PM and 6 PM. Afternoons can get quite hot, especially between April
and July.

Tickets: Tickets to the Pancha Pandava Rathas complex and the Shore
temple complex cost INR 30 for Indian citizens and visitors from the SAARC countries, and USD 5
for foreign nationals. Children under 14 can get in for free. Please carry ID for verification. For the
Lighthouse complex, the entrance fees for children is INR 5, adults is INR 10 and for foreigners is
INR 25, for still cameras INR 20 and video, INR 25.

Photography: Photography is permitted in the area, however, if you are
planning to shoot videos, you will have to purchase a video camera ticket costing INR 25 at the
ticket counter.

Footwear: Flip-flops or sandals are ideal as the area is quite sandy.

Temple timings: The Kapaleeshwara temple is open from 6 AM to 12 PM
and from 4 PM to 930 PM on all days of the week.

Best time: Go early if you can. The walk is most pleasant between 6 AM
and 9 AM and between 4 PM and 6 PM.

Attire: This is a place of worship, so please dress conservatively, keeping
your shoulders and knees covered. You may be denied entry by the temple if your attire is
considered inappropriate.

Footwear: You will have to take off your footwear at the counter outside
before you enter the temple. You can keep your socks on if you want to. Even carrying footwear in
your bags into the temple is not permitted.

Temple timings: The monuments at Mamallapuram are open from 6 AM to
6 PM, on all days of the week.

Best time: Go as early as you can. The walk is best done between 6 AM
and 10 AM or between 4 PM and 6 PM. Afternoons can get quite hot, especially between April
and July.

Tickets: Entry to all the monuments covered on this trail is free. However, if
you are also planning to visit the Pancha Pandava Rathas (Five Rathas) complex and the Shore
temple complex, you will have to buy a ticket. It costs INR 10 for Indian citizens and USD 5 for
foreign nationals. Children under 15 can get in for free.

Footwear: Flip-flops or sandals are ideal as the area is quite sandy. If you
plan to enter the Sthala Sayana Perumal temple, you will have to take off your footwear outside
before you enter the temple.

Photography: Photography is permitted in the area, however, if you are
planning to shoot videos, you will have to purchase a video camera ticket costing INR 25 at the
ticket counter. Photography is not allowed inside the Sthala Sayana Perumal temple complex.

About the Egmore Museum

The Egmore Museum is open from 9:30 AM to 5:00 PM six days of the week. The Museum is closed on all Fridays and on three National holidays – 26 January, 15 August and 2 October. Please note that Tickets are issued only until 430 PM.

You will have to buy a ticket to enter the museum. There are different rates for Indians and for foreign visitors. There are also student rates, for which you must carry your student ID. The applicable rates are:

Photography is permitted inside the Museum if you buy a camera ticket. If you plan on taking only still photographs, the ticket costs Rs 200/-. However if you plan on shooting videos, the cost of the ticket is Rs 500/-

Location-aware audio tours. Don’t merely visit. Join us on a quest for stories!